Turkey’s army and international coalition forces on Wednesday started an operation to drive Islamic State jihadists out of a key Syrian border town, a statement from the Turkish prime minister’s office said.

“The Turkish Armed Forces and the International Coalition Air Forces have launched a military operation aimed at clearing the district of Jarablus of the province of Aleppo from the terrorist organisation Daesh,” it added, using an Arabic acronym for IS group.

The state-run news agency Anadolu said the operation began at around 4 am local time (0100 GMT).

Turkish F-16 jets dropped bombs on IS targets in Jarablus — the first such assault since a November crisis with Russia sparked by the downing of one of Moscow’s warplanes by the Turkish air force, the private NTV television reported.

Security sources quoted by Turkish television said a small contingent of special forces travelled a few kilometres into Syria to secure the area before a possible operation.

Several mortar rounds from IS-held Jarablus hit the Turkish border town of Karkamis on Tuesday, prompting the army to pound the jihadist positions on Syrian soil with artillery strikes.

The US Marines are testing a pocket-sized helicopter drone 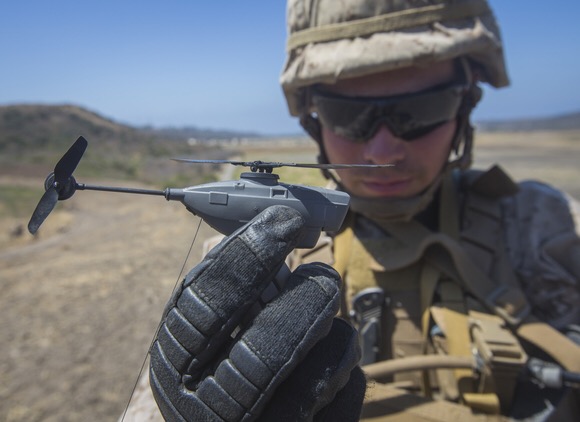 The U.S. Marine Corps is testing a pocket-sized drone that can deliver live video feeds from three cameras and is small enough that it’s almost invisible from the ground.
The Black Hornet PD-100 can stay aloft for 25 minutes and has a range of 1.6 km (1 mile). That means Marines can use it for surveillance far beyond their current position.

It can fly missions guided by GPS yet fits in a pocket. The cable hanging out the back in this image is an antenna, not a cord for power or data.

The three cameras can be used to send live video or take pictures. One camera points ahead, one directly down and one at 45 degrees to the ground.

The tests took place in California recently during an exercise called MIX-16, held to evaluate new technologies and how they might be used by the Marines.

The Black Hornet has already been used in Afghanistan by the British military, and the U.K. Ministry of Defence was sufficiently impressed to make it an ongoing part of the country’s military kit.

It’s made by Norway’s Prox Dynamics, and the Norwegian Special Forces have ordered a version with night-flying capability. The drone is also used by a handful of other countries.

During her speech at the United Nations, Attorney General Loretta Lynch announced that the Department of Justice is launching a global police force in order to combat “violent extremism” in the United States.
A proposal such as this, with all of its various implications of an overreach of power, should be front-page news everywhere, but unfortunately, not many noticed. And that’s a concern to constitutional attorney KrisAnne Hall who released a video to make the rallying call.
“Something happened yesterday that I’m afraid will go completely unnoticed,” Hall began. “Yesterday, the Department of Justice, several cities within the United States, several municipalities, linked up with the United Nations to form a global police initiative. It is called the Strong Cities Network.”
“This is such an attack on our Constitution. This is such an attack on the sovereignty of our states,” she added. “This will eliminate the rights of the people as we know them under a constitutional republic.”