CAIRO (AP) – Egypt presented a proposed cease-fire to Israel and Hamas aimed at ending the monthlong war, Palestinian officials said early Wednesday after negotiators huddled for a second day of Egyptian-mediated talks meant to resolve the crisis and bring relief to the embattled Gaza Strip.

Palestinian officials told The Associated Press early Wednesday morning that Egypt’s proposal calls for easing parts of the Israeli blockade of Gaza, bringing some relief to the territory. But it leaves the key areas of disagreement, including the Islamic militant group Hamas’ demand for a full lifting of the blockade and Israeli calls for Hamas to disarm, to later negotiations.

If the sides accept the proposal it would have a significant impact on Palestinians in Gaza as it would improve the movement of individuals and merchandise to the West Bank, the officials said. Gaza exports and other businesses have been hit hard by restrictions imposed on the territory by Israel and Egypt after Hamas took control of Gaza in 2007.

One of the Palestinian officials who spoke to AP said that according to the Egyptian proposal the blockade would be gradually eased.

Hamas official: This is second and final cease-fire with Israel A senior Hamas official said on Tuesday that his group was locked in “difficult” talks in Egyptian-mediated efforts in Cairo to forge a lasting cease-fire in Gaza with Israel.

“We are facing difficult negotiations. The first truce passed without notable achievements. This is the second and final cease-fire,” 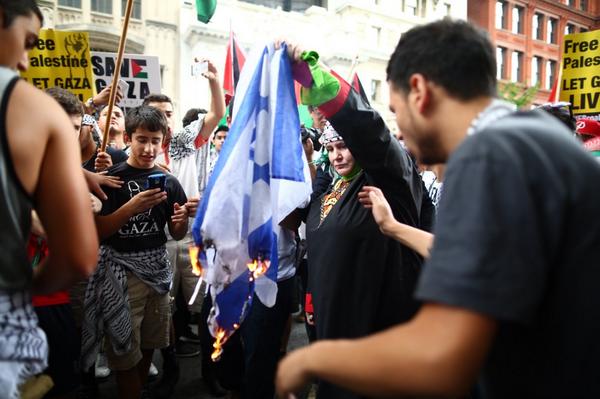 Marchers in Washington D.C. burn the Israeli flag in support for Hamas.

Please stand and support Israel, this is God’s land and it WILL be protected by Him.