Pope in historic talks with Grand Imam of Al-Azhar

Pope Francis has met the grand imam of Cairo’s Al-Azhar Mosque at the Vatican in a historic encounter that was sealed with a hugely symbolic hug and exchange of kisses.

The first Vatican meeting on Monday between the leader of the world’s Catholics and the highest authority in Sunni Islam marks the culmination of a significant improvement in relations between the two faiths since Francis took office in 2013.

“Our meeting is the message.” ~ Pope Francis

“Our meeting is the message,” Francis said in a brief comment at the start of his meeting with Sheikh Ahmed al-Tayeb, Vatican officials told a small pool of reporters covering the event.

In a statement on the trip, Al-Azhar, an institution that also comprises a prestigious seat of learning, said Tayeb had accepted Francis’s invitation in order to “explore efforts to spread peace and co-existence.”
The “very cordial” meeting lasted around 30 minutes, the Vatican said in a statement after the talks. In all, the imam spent just over an hour at St Peter’s.
Conciliatory gestures
Vatican spokesman Federico Lombardi said in a statement that the pope and the imam had “mainly addressed the common challenges faced by the authorities and faithful of the major religions of the world.”

At the meeting, the pope presented the imam with a copy of his recent encyclical, Laudato Si’, a letter to the faithful in which he urges the world to wake up to the threat posed by climate change and also calls for a rebalancing of the economic relationship between the industrialised and developing worlds.

Tayeb decided to accept the invitation to Rome as a result of the numerous conciliatory gestures Francis has made to the Muslim world since being elected in early 2013.
“If it were not for these good positions the meeting would not be happening,” the imam’s deputy, Abbas Shuman, told AFP on Sunday.
Ties were badly soured when the now-retired Benedict made a September 2006 speech in which he was perceived to have linked Islam to violence, sparking deadly protests in several countries and reprisal attacks on Christians.
After the tensions of the Benedict years, Francis moved quickly to set a new tone, sending a personal message to the Muslim world to mark the end of the first month of Ramadan of his pontificate.
The Argentinian pontiff followed up by pushing various inter-faith initiatives and he was accompanied by both Rabbi Abraham Skorka and Islamic studies professor Omar Abboud when he visited Jordan and Israel in 2014.

But perhaps the gesture that clinched the deal was the most dramatic piece of political theatre of his papacy: his April visit to the refugee crisis island of Lesbos which concluded with him bringing three Syrian Muslim families back to the Vatican. 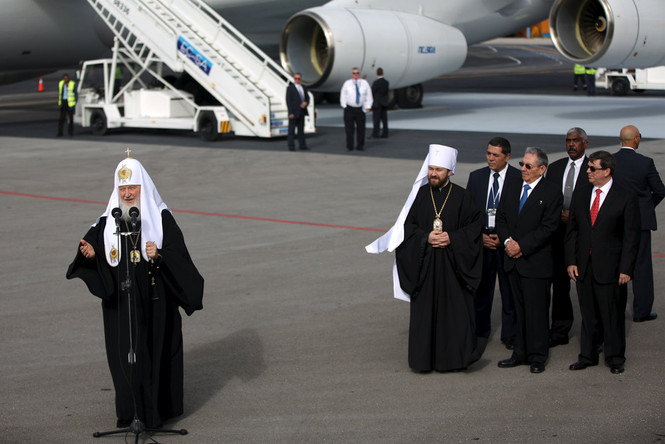 Patriarch Kirill, the head of the Russian Orthodox Church (L) talks to journalists, as Cuba’s President Raul Castro looks on, after his arrival at the Jose Marti International Airport in Havana, February 11, 2016. © Alexandre Meneghini 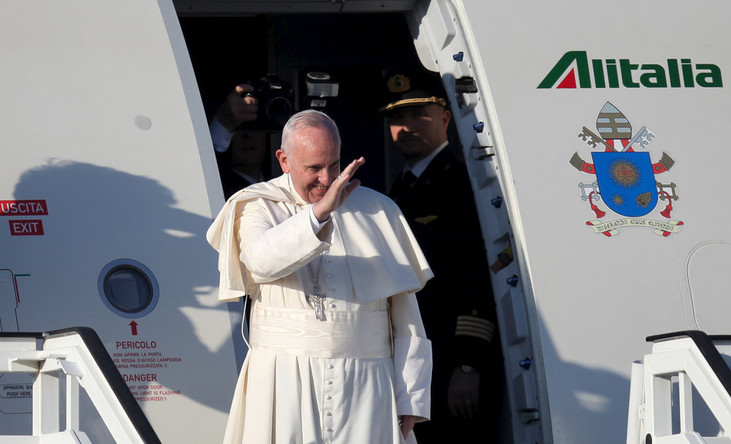 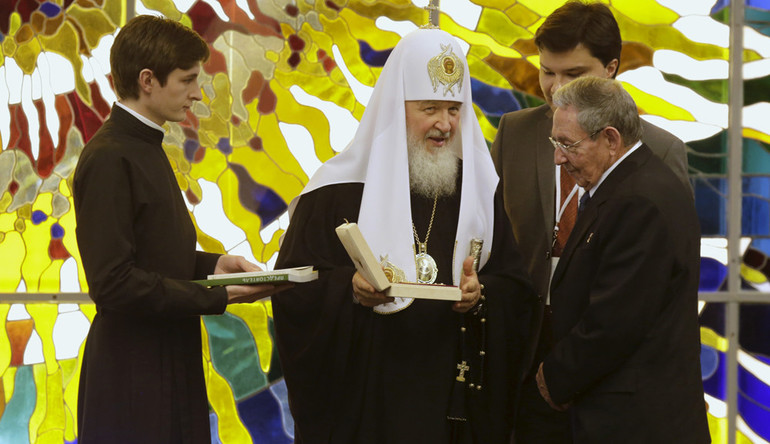 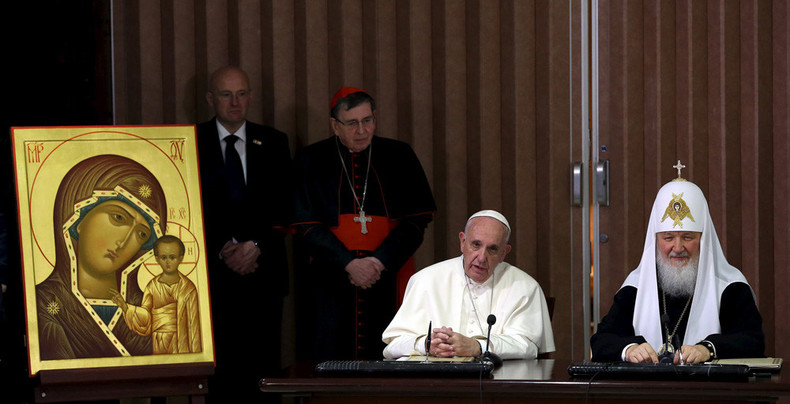 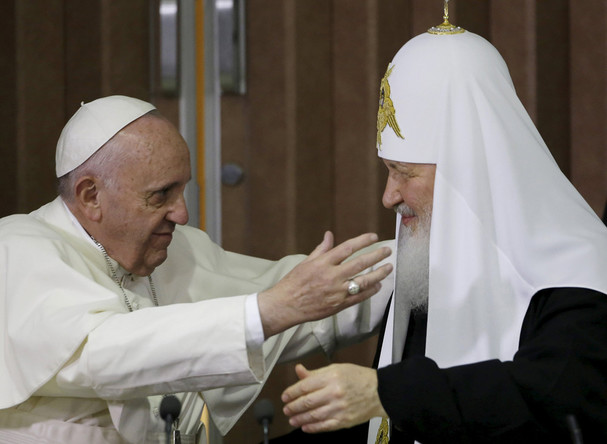 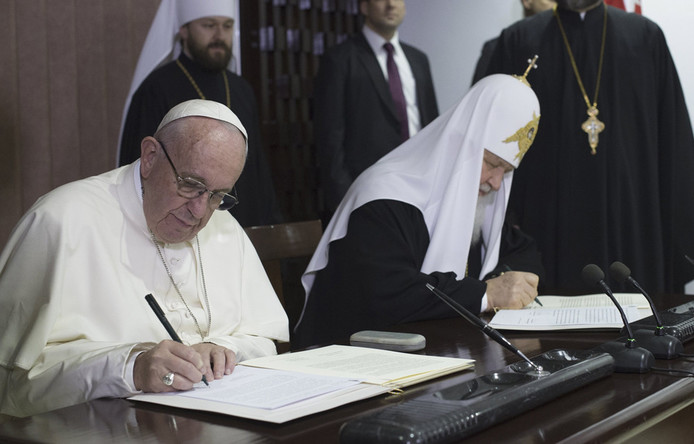 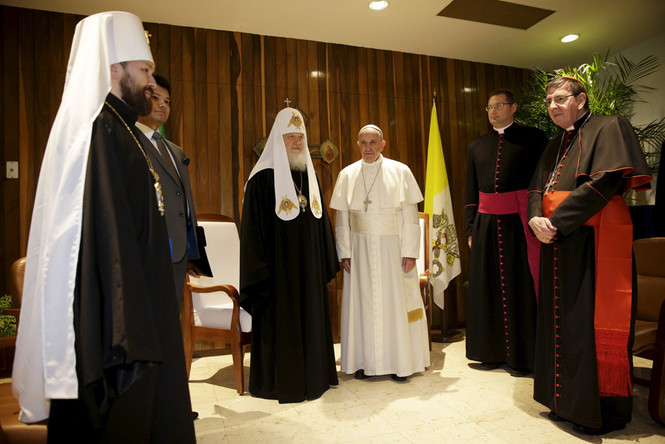 Pope Francis Speaks to US Congress

Pope Welcomed to the Oval Office

In an address to thousands during first trip to Cuba, pope appeals for changes amid new detente with United States

Pope Francis met with Fidel Castro on Sunday after urging thousands of Cubans who filled Havana’s evocative Revolution Plaza to care for one another, and not judge each other, as he opened his visit to the country amid great hopes that the key role he played in bringing about detente with the U.S. will result in changes on the island.

The Vatican described the 40-minute meeting at Castro’s residence as informal and familial, with an exchange of books and discussion about big issues facing humanity, including Francis’ recent encyclical on the environment and the global economic system.

Video of the encounter broadcast on Cuban state media showed the 89-year-old former president chatting animatedly with Francis and shaking the pope’s hand, the pope standing in his white vestments and Castro sitting in a white button-down shirt and Adidas sweat top.

The meeting brought together the leader who shaped Cuba for the last half of the 20th century and Latin America’s first pope, who many Cubans credit with opening a path to the future by mediating the warming diplomatic relations between their country and the United States. After his Cuba visit, the pope heads to his first ever trip to the U.S.

An estimated 50 dissidents were detained and prevented from attending papal events, according to the dissident Cuban Commission for Human Rights and National Reconciliation.

Most were released after a few hours but the Patriotic Union of Cuba (UNPACU), the country’s largest dissident group, said four of its activists remained in jail as of late Sunday.

Earlier in the day, believers and non-believers alike streamed into the square before dawn for Francis’ Mass, some of them wearing matching clothes to mark themselves as part of the various parishes and other groups gathered for the papal visit.

By 6 a.m., every spot in the Plaza available to the public was full, and the crowd erupted in cheers when history’s first Latin American pope made his first drive through the crowd in his open-sided popemobile.

Francis didn’t disappoint, winding his way slowly through the masses and stopping to kiss children held up to him.

The crowds endured hot, humid weather, but the sun stayed behind clouds as the assembled multitudes fanned themselves with anything available. Several children from parishes around Havana took their first communion from the Pope while a small army of priests and lay Catholics distributed communion among the crowd. Spirited Cuban music floated around the gathering, a local touch that many in the crowd appreciated.

“The music was great; it was really Cuban music and in our own language,” said Yaima Soto Mora, 14. The chorus, she noticed, were wearing caramel-colored robes topped with green, just like Cuba’s national tree, the royal palm.

While most Cubans are nominally Catholic, fewer than 10 percent practice their faith. The crowd was not as big as when St. John Paul II became the first pope to visit the island in 1998, but it drew a varied crowd of people, including many non-Catholics who wanted to hear Francis’ message.

In his homily, Francis spoke in his native Spanish and urged Cubans to care for one another out of a sense of service, not ideology, and to refrain from judging one another by “looking to one side or the other to see what our neighbor is doing or not doing.”

“Being a Christian entails promoting the dignity of our brothers and sisters, fighting for it, living for it,” Francis told the crowd. “That is why Christians are constantly called to set aside their own wishes and desires, their pursuit of power, and to look instead to those who are most vulnerable.”

Several people compared his style favorably to that of his predecessor, Pope Benedict XVI, who retired in 2012. “With Pope Benedict half of the mass was in Latin so we could not understand it,” said Naomi Lopez Moran, 19, an engineering student who said she practices the religion of the Yoruba people of Nigeria. “I think that even the Catholics could not understand him at all. Pope Francis is so different.

Maria Regla González, a 57-year-old teacher, said she appreciated Francis’ message of reconciliation and unity for all Cubans.

“This is a crucial moment, and the pope’s support for us is very important,” she said. “He made a call for unity, and that’s what we want.”

The morning Mass kicked off a busy series of events for Francis, including a formal meeting with President Raul Castro. Francis will finish with an evening vespers service in the San Cristobal cathedral and meet with Cuban young people.

In an important aside, Francis ended the Mass with an appeal for Colombia’s government and rebels, who have been holding peace talks in Havana for over two years, to put an end to South America’s longest-running armed conflict.

“Please, we do not have the right to allow ourselves yet another failure on this path of peace and reconciliation,” he said.

The appeal followed the historic call he issued to Presidents Barack Obama and Cuban President Raul Castro to end their half-century of estrangement that resulted in the restoration of diplomatic relations this summer. Since then, the two leaders have reopened embassies in each other’s countries, held a personal meeting, had at least two phone calls and launched a process aimed at normalizing ties in fields ranging from trade to tourism to telecommunications.

Jose Rafael Velazquez, a 54-year-old worker, arrived with his wife at the plaza three hours before Mass began. He said he isn’t religious, but came more out of curiosity to witness a historic event.

“We also are very hopeful for this visit, because the pope was key in the deal with the United States,” he said. “Ever since the announcement, there have been changes, and this visit gives me more hope that it’ll get better.”

The Vatican has long opposed the U.S. trade embargo on the grounds that it hurts ordinary Cubans most, and is clearly hopeful that detente will eventually lead to a lifting of sanctions.

But only the U.S. Congress can remove the embargo. Francis will visit Congress next week at the start of the U.S. leg of his trip, but it’s not known if he will raise the issue there.

Al Jazeera and The Associated Press. Additional reporting by Maria Duran in Havana.

Revelation Unfolding
Create a free website or blog at WordPress.com.